Two of the manufacturers of large quantum computer systems, IBM and Google, have published ambitious roadmaps in quick succession for the availability of systems with significantly more qubits than today. In mid-September, IBM presented its current development strategy in its Reasearch Blog, which envisages a continuous increase in the number of Qubits in the next quantum chips up to 1121 Qubits in the Condor model by 2023. In addition, these developments are intended to lay the foundation for the perspective development of systems with more than 1 million qubits by the end of the 2020s. Google has committed itself to a similar goal: In this year’s summer symposium, the goal was announced to develop a system with 1 million qubits by 2029. In contrast, quantum computer systems available today range from 50 to 80 qubits. 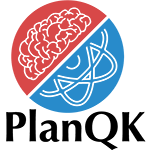 The PlanQK project expressly welcomes these developments and wishes both the two manufacturers mentioned above as well as all other developers of quantum computer systems every success in opening up new possibilities. The availability of large quantum computer systems ensures that applications such as quantum-assisted artificial intelligence will soon be available for widespread use. In addition, the competition represents an advantage for all future users, enabling them to use the corresponding applications cost-effectively. PlanQK supports the development of the currently evolving ecosystem by connecting users, solution partners, experts and hardware providers on one platform to enable the efficient use of quantum computer systems by running both user-specific and generally available applications.