In addition to the recently published forecasts on quantum hardware development by IBM and Google, the company IonQ announced in early October that its quantum computer is the (currently) strongest in the world. This statement is based on IBM’s proposed metric of the so-called quantum volume, which takes into account factors such as error resistance and entanglement capacity in addition to the pure qubit number. While companies such as IBM and Honeywell announced a quantum volume of 64 for their computers in the course of this year (and IBM even announced one of 128 since the beginning of December), IonQ predicted a quantum volume of more than 4 million based on the parameters of their quantum computer architecture. This statement was reason enough for us to work out the differences between the qubit architectures in more detail. 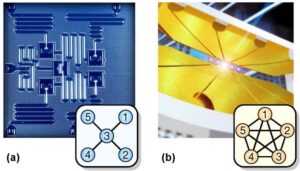 Both IBM and IonQ pursue the goal of a universal quantum computer, but take a fundamentally different approach to the physical implementation of a qubit: While IBM works with superconducting technology (keyword: transmon-qubits), IonQ realizes qubits with the help of ion traps. Ion traps are electromagnetic fields that can spatially fix charged particles (ions), which in turn allows their controlled manipulation. Because of their suitable physical properties, most ion trap computers use ytterbium atoms, from which an electron has been removed, which makes them positively charged and thus ions. The actual qubit are then two different energy levels of the ion, between which can be switched with the help of lasers. When the states are measured, the ions that were at the higher energy level (state 1) light up, while the ions at the lower level (state 0) do not.

However, a practical comparison of the architectures does not exist so far, despite the measurement in quantum volume. Until then, the advantages and disadvantages of the approaches can only be considered on paper: Especially coherence and gate times behave diametrically; while a superconducting computer has gate times in the nanosecond range, ion traps reach „only“ microseconds. Faster gate times express the speed of the algorithms and therefore currently seem to favor the superconducting quantum computer. In contrast, ion trap computers can shine with coherence times, which express the duration of the stable position of a quantum computer (about a few seconds). Superconducting quantum computers currently have a coherence time of microseconds. This comparison can be interpreted as an indication that ion trap-based architectures can better tolerate longer, more complex algorithms at the current stage of construction. Finally, the environments of these architectures have to be considered: For example, the energy-intensive cooling of superconducting quantum computers is an important factor, since the computer has to be cooled down to almost absolute zero (-273.15 °C) for this purpose.

A final verdict is therefore not yet possible, but these two, as well as other exciting development approaches, must be followed closely.